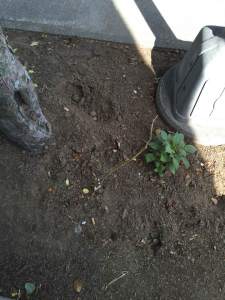 I know our little flower beds outside our shop weren’t doing so well, and looked kind of sad.

I’m sure you meant well by pulling up the remaining plants – more than likely you thought they deserved a better home with you than in our wretched little space.

However… we were putting in a fair amount of time tending to that tiny garden, and had plans to add more colorful flowers later.

Seriously, what ails you, anyway?  What makes you think it’s okay to steal from us?  And yes, pulling up our plants is stealing.  It doesn’t matter what the value of something is, or where it’s located, taking something without permission that doesn’t belong to you is stealing.

Okay, we get it.  We understand that sometimes people want something and for whatever reason, can’t have it.  We’ve been there with a budget so tight that paying bills is a desperate challenge each and every day.

We’ve been there trying to figure out when – and if – we’ll ever be able to pay back those to whom we owe money, and wishing we could afford things that other people have.

But other than the stupid teenage pranks that many of us pulled (and which we grew out of but still cringe over), we have never once deliberately taken something from another person with no intention of paying them for it or reimbursing the expense.

But it was ours.  OURS.  Not yours. And you had no right.